I was wondering if by using 2 adapters, one in the original electric circuit and one in the new circuit in the extension, then connecting them via an ethernet cable would let me (safely) create a connection between the two and bring the extension into our current network?

I have had differing opinions when asking staff in high street stores, one of which told me I might blow up my electrical circuits!

I'm presuming you're talking about 2 powerline adapters, rather than some Frankenstein electrical adapter. My reply here is based on the former, the latter sounds more fraught.

You could certainly use a length of ethernet cable between two powerlines on two separate mains supplies and that would work perfectly well.

However, I'd be very surprised if they are actually separate supplies. Are they both ultimately connected to the same consumer unit? It might be that the round trip distance is just too long for a reliable connection. Have you tried connecting one in the separate supply and connecting to it?

The worst that could happen is that the ethernet traffic would interfere with the powerline traffic (if in they are on the same circuit) and cause network collisions, which would result in poor network performance.

There is no danger in stringing a piece of ethernet between them and seeing what happens. At worst, it won't work.

The best strategy for testing this would be to pair two separate sets of adapters. So A1,A2,B1,B2. plug A1 into router and A2 near the other circuit. Plug something into it at this point to make sure it works. (a laptop etc)

You could also try plugging A2 directly into the separate circult at this point and see if it works.

If it doesn't, get an ethernet cable from A2 into B1 then plug B2 wherever you need it and give it a go!

Is this what you're attempting OP? 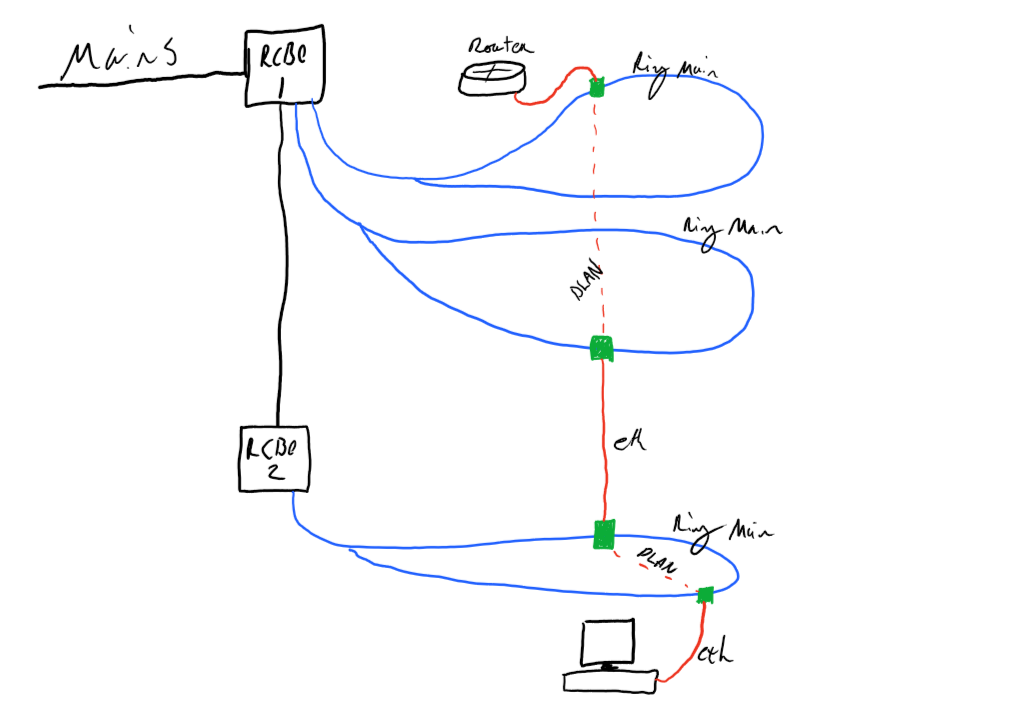 If it is, then it should function ok. I'm a networking guy though, not an electrician. There is an issue regarding linking different buildings with Ethernet as you create a potential difference that wouldn't trigger a breaker. As your feed will be chained I believe you are safe as its single phase, but you really should consult an electrician before installing anything.

4
Powerline - potential causes for speed loss
2
Is it possible to daisy chain Powerline network adapters?
0
Can I hook up another internet router to the phone line from the wall when the main router+modem is connected upstairs?
0
Powerline Ethernet Adapter and two electrical boxes
1
Strange powerline networking issue - 'missing protocols' in Windows 10
1
Why is my internet, that I get from a Wi-fi Extender and a Wi-fi Hotspot, both connected to an electric socket, not working?
0
Home Network - Daisy Chain vs 1 Big Switch to separate ports
2
Can I "daisy chain" powerline adaptors?