OnBoard ethernet controller: LAN cable not plugged in

I have a following problem on Windows 7 64bit, with OnBoard Ethernet on MSI K9N Neo V2 MotherBoard: I have connected my PC to a router via UTP cable, but it can't connect to local network. I eliminated the following causes:

That covers most of what I have tried so far, but no luck. Now, let me show you my IP config: 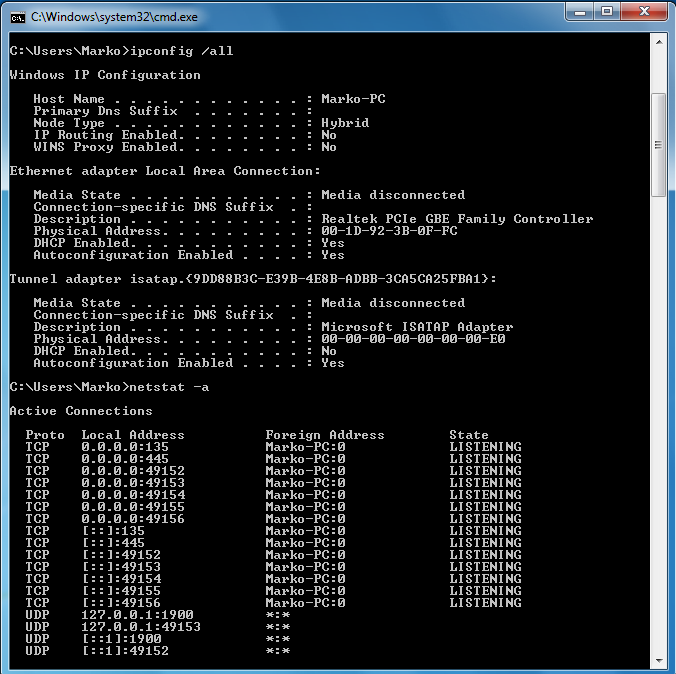 I also tried it on Ubuntu(Live CD). It doesn't report any errors, but it still doesn't connect. Then I stumbled upon THIS, on ubuntu forums, and the problem for this guy was that the drivers that were loaded were made for a different kernel. Then I checked my NIC's ID in linux' lspci, and it says: Realtek Semiconductor Co., Ltd. RTL8111/8168/8411, so I downloaded appropriate drivers for Windows(I couldn't try them on Ubuntu as I was running the Live CD so it wasn't possible for me to remove/add drivers), and it still doesn't work.

Also, WRT NIC blinking yellow/green: I noticed it blinks 4 times rapidly when I start my computer(seems like it starts blinking when computer starts initializing hardware), and no blinking past that point. I expected to see some blinking when NIC tries to find a network(i.e. when OS is loaded and loader circle appears over network icon in system tray), but it doesn't blink.

All you've posted (especially same issues on Ubuntu) points to a dead NIC. RMA the board.

Not the answer you're looking for? Browse other questions tagged windows-7 networking network-adapter or ask your own question.

0
Ethernet controller not working Win7 - how to diagnose problem?
1
Specific ethernet cable not working with router only, but works with NIC
0
How can I diagnose suspected NIC issues?
0
Onboard audio and LAN not working
6
Find Windows 7 driver for Realtek RTL8111/8168/8411 PCI Express
0
Linux limiting upload bandwidth