I have a problem with a SSD (Crucial BX100) bought last week and Windows 10 install.

When I try to install Windows 10, the installation software don't recognize my SSD, I have a same windows as this one : 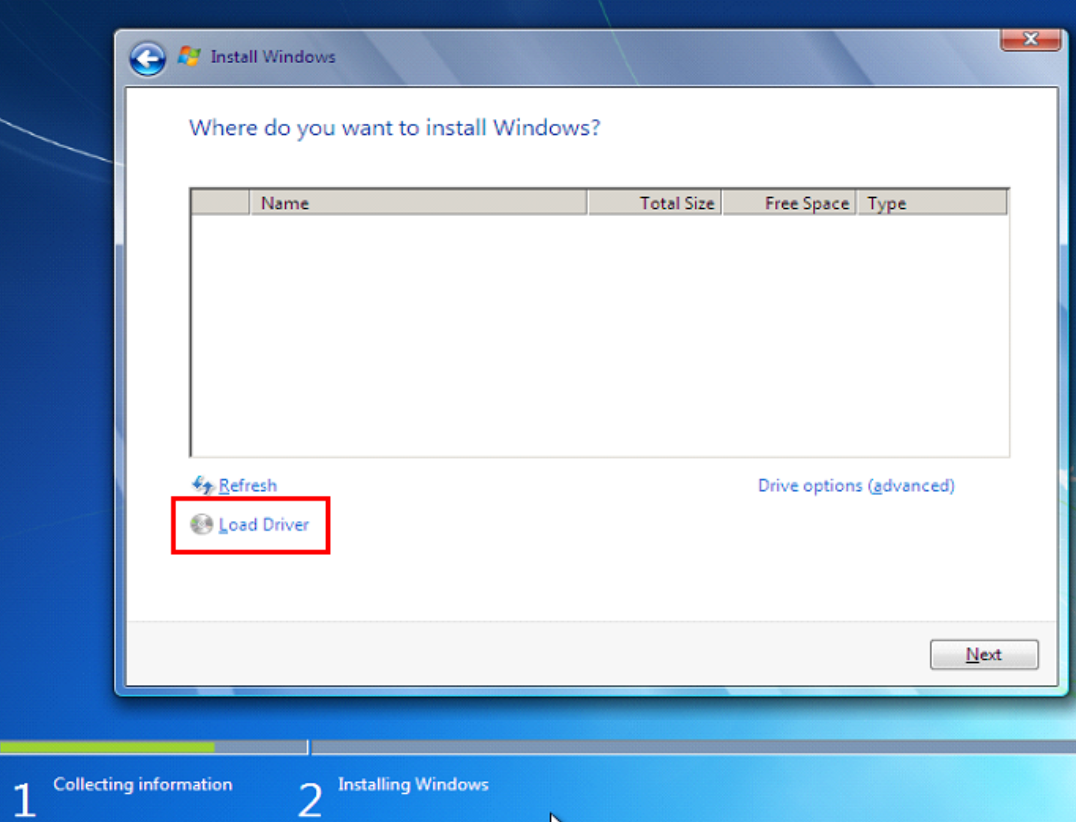 I can see the SSD from the BIOS without any trouble.

I also tried two different things : Without changing anything in the configuration of the computer I tried to install a Windows 8.1 instead of a Windows 10, I didn't had any trouble, the install software saw my SSD and I could succesfully install Windows 8.1, so my SSD is correctly plugged to the motherboard and its BIOS configuration is ok.

I tried also to put the SSD on another computer and install Windows 10 on it, it worked without any issue, so my bootable Windows 10 key is ok too.

So, what could prevents me from installing Windows 10 especially on this computer particularly ?

The motherboard is an ASROCK AliveSATA2-GLAN if it can be useful.

In his comment, qasdfdsaq spoke about the different SATA connectors of the motherboard. I have 4 SATA connector on my motherboard (2 * JMB363 and 2 * VT8237A) .I was previously using the JMB363 SATA controller (a SATA 2 controller), I tried to use the other one (a SATA 1 controller) and it worked, I succeed to install Windows 10. But I have now two problems :

Windows 10 does not have the driver for the SATA controller. You can download the driver here. Unzip that to a USB stick and when you click "Load Driver" select the appropriate driver and you should be good to go.

You need drivers for the SATA controller, not for SSD. Check AsRock site for them.

This worked for me

I had similar problem with Crucial BX330 on ASUS A88XM-Plus this week.

I have a multi boot win10/ubuntu system and when i installed SSD as secondary drive, then win10 and BIOS (!) could not recognize the new SSD but ubuntu could. After Bios upgrade, SATA drivers for win10 nothing changed. When i checked ubuntu log i saw that SATA link 6.0 Gbps failed for this drive and finally SSD connected with 3.0 Gbps link. So I changed BIOS SATA configuration to 3.0 Gbps and after that win10 can see the disk (bios also).

Try to slow down the SATA speed or replace components

I tried many of the things listed here on the old HP Pavilion P6000 with AMD chipset I was trying to get going. In the end, it was as simple as going into the BIOS and switching the SATA mode from RAID to AHCI.

What works for me was to format ssd into fat32 instead of NTFS. I used Gparted iso to format it in fat32 and then finnaly win10 instaler was able to see my new ssd :)

Not the answer you're looking for? Browse other questions tagged ssd windows-10 windows-installation or ask your own question.