What does CPU column means on Process Tab on Task Manager

I have an application in Python that I have deployed in a Client. It shows 25% on CPU column on Process Tab. I wonder what it means or how it affects the CPU? Because most of the processes have only 0%.

Here is an image for the actual CPU percentage on my Task Manager. 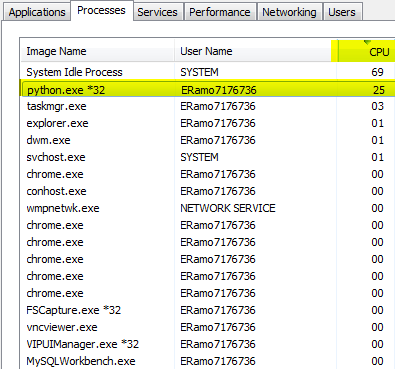 I think Python apps can't use multiple logical processors, so you might want to look into multi-core processing in Python if you want Python to use more of your CPU.

You can also limit the amount of logical processors Python uses by right-clicking on the process and selecting "Set Affinity". Selecting " Priority" will also let you choose how much of a priority that process is compared to other processes.

That process is using 25% of the CPU to do whatever it is doing.

Not the answer you're looking for? Browse other questions tagged cpu python process task-manager or ask your own question.