All folders and files deleted from desktop (Win 7)

6 months back all my files from desktop, folders and files in it were deleted automatically (permanently). I used a browser after reading an article from PC World "The browsers with extra security than chrome and firefox". So out of those specified 25 browsers I used one (I don't exactly remember the name).

But while I closed that browser after use all my files were deleted from he desktop (like around 150 GB). I know it is not so good to store the data's in desktop but I did that stupid thing.

I contacted PCWorld regarding it, they told me they are 100% sure about it, that it was not caused because of that browser.

And the most interesting thing about that browser was that it was a standalone program (like tor) , doesn't need to be installed .So I used some recovery tools and recovered most of the files. Then I installed Malware bytes and Spy-Scanner and scanned my whole system and nothing suspicious was found. I use Avast Antivirus which I update daily(Free Home version). But my link to the desktop from favorite's was gone.

Then I couldn't find my desktop items from under "C:\Users" folder. I thoroughly checked by couldn't find my items. I tried coping news files to desktop and tried to find it in under the user folder but couldn't. So the only place I could view the desktop files were under the save or upload options (like saving a web page, or saving a new .docx file etc) then I dragged the desktop link from there to the favorites list.

But yesterday the same thing happened, I was playing an online game and when I closed the game nothing was there in the desktop(Some links were there : Recylce Bin, Empty folders, Net beans.ink etc). I lost nearly like 10GB of data. The main thing was I had my work folder in desktop. So I thought of checking the system in detail. I couldn't find any suspicious process or services running.

The only thing I found a bit suspicious was my desktop address. Usually the desktop files are stored under C:\Users\User-Name\Desktop but the files in that location are not being displayed in my case. I checked the address of the Desktop shortcut in favorites and found that the link used there was different. The current link were for the desktop shortcut is : C:\Users\My-Username\Cookies\Desktop

But the most fascinating thing is that there is no folder named cookies under the user folder. 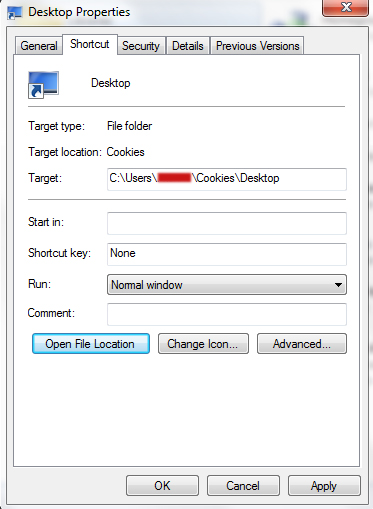 Now if I click on the "Open file location" it shows me my desktop.

I would really like to know how the files are being automatically deleted. I searched it on the internet a lot but couldn't find the exact reason.I don't have any unwanted programs on my system. Also I would like to know how to change the desktop address/location to default as in other systems.

Another thing I would like to add to this is that I recovered most of the files which were deleted last time from the desktop and the folder location was : "C:\Users\My_Username\AppData\Roaming\Microsoft\Windows\Cookies\Desktop\". And I tried finding this folder in my C drive but as mentioned earlier there is not folder called cookies in there.

I have scanned the system with RougeKiller and found some threats in Registry.But as I am not sure of what those PUP registry entries were I didn't delete them.But I removed some programs and addons which were shown as malicious software. The scan report is as follows : Rouge Killer Scan report

Hoping for a solution from someone.

I have faced a similar problem however this time round it is about plugging in an external hard disk.

This has happened to me 3 times. I have 3 Toshiba Canvio external hard disks which were used on old Window 7. I have never faced any issues plugging my hard disk into a USB 3.0 Port in the past.

However in recent times the following happen on Windows 10 platform. a.) Plug in the USB 3.0 External Hard Disk first time. Folders turn up fine. b.) After usage, I unplug, without having the option to eject the external harddisk. c.) When I replug in the next time, 1st HDD: Window suddenly prompt that whole hard disk got re-formated. 2nd HDD: Toshiba Canvio hard disk suddenly lost the partition table and I will have to perform the painful recovery. 3rd HDD: Lost Partition and HDD was converted into RAW format.

It happened 3 times this year for me. I am devastated from this happening.

I decided that a NAS storage is 100% much safer than Backing up Data into external hdd that is connected to USB 2.0/3.0 plug.

I felt that USB External Hard Drives are only good for temporary transfer of files only and not to be used for long term storage.

Not the answer you're looking for? Browse other questions tagged windows-7 windows file-management desktop or ask your own question.