How do I reinstall Windows 10, keeping existing apps and files?

After running a checkdisk and rebooting to repair files, Windows 10 now boots to a black screen with no mouse cursor. (Specifically, I restarted to perform a checkdisk, which completes to 100%, the screen goes black, and that's it. Rebooting runs the check again, then a black screen, or shows the normal Windows startup spinner, then a black screen. There is never a mouse cursor and the screen resolution is low. Restarting shows the startup failure assistance app every three reboots.) After a lot of fiddling around with dism in several ways and svc, which fixed some items but now report 100% health, my last resort is to reinstall Windows 10 from ISO over my existing installation. How do I do this?

I would like to reinstall, but keep existing installed applications, documents and settings. Nuking drivers is ok.

Is there a way to install "over the top", the way there used to be in older versions of Windows?

When Windows detects it has not started properly (seems to happen the third time you reboot) it boots some kind of recovery app:

Restart of course fixes nothing, and Advanced shows a number of options, including showing a command prompt, resetting the PC, or reverting to a previous build.

(I chose the options to detect startup problems - none found; and through the command prompt ran simc and svc - svc found some errors and fixed them, but there's no effect in helping it boot.)

Going back to the previous build implies you will lose some apps and settings:

...so is not an option. Also, the current build was fine.

Resetting offers to either wipe the PC completely, or wipe all apps: 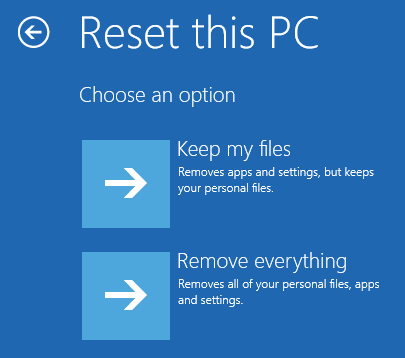 Neither of these is an option if you want to retain your installed applications and data - in fact I'm not sure what the use is, why anyone would want to lose their apps. (I don't know if this refers to Windows Store apps or all applications. As noted above, I would like to reinstall, but keep existing installed applications, documents and settings. Nuking drivers is ok.)

Although it's unclear exactly which apps and settings are removed, Microsoft is pretty clear some important items are deleted in this article about a Refresh install in Win10: "Select Keep my files. This option keeps your files plus apps that came with your PC. Apps you installed and changes you made to settings will be removed." If those are Windows Store apps, I'm ok with it, but if those are normal applications and settings, that is an unacceptably lossy operation.

Booting from a Win10 ISO is less clear. There are two options:

The first is presumably the one to use to keep installed application and files.

The second implies that it performs an app-wiping reset, although I may be reading this into it because of the language from the Reset command. I am not sure if this is true.

Going with the first informs you that you need to start the update from within Windows, which is not possible when Windows won't fully boot.

Going with the second gives an error that it needs more space in order to install (the dialog is shown when clicking the Show Details link): 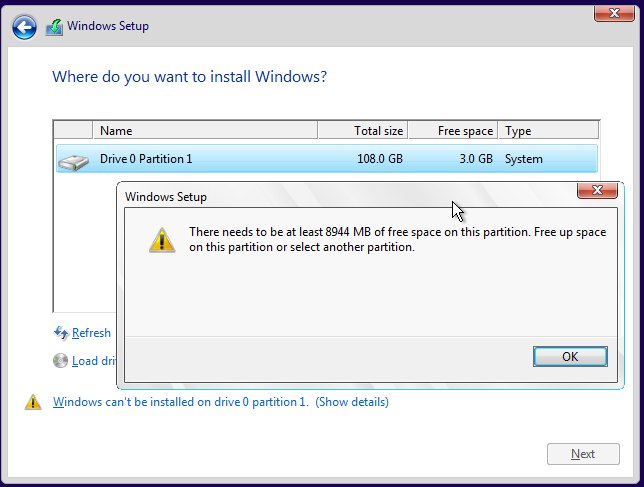 Which also is not possible, and so it doesn't seem to be performing a simple reinstall after all.

So: how do you perform a lossless, app- and document- and settings-keeping, repair or reinstall of Windows 10?

Update: Actually, I just went ahead and did the Reset, and was delighted to see that the process moves all the "deleted" data to a C:\WINDOWS.OLD directory. From there, I was able to selectively copy back and run the programs I wanted. YMMV, of course, since not all programs will like this crude method—but you could contact the company to see if it's possible to get the OS 'recognize' and 'register' the files already there.

Not the answer you're looking for? Browse other questions tagged boot windows-10 repair lossless or ask your own question.

0
Deleted WindowsApps folder, how to reinstall apps
1
None of the Windows Store apps show up in application list
1
How can I list all apps installed from Microsoft Store?
0
Reinstall Universal Windows Platform
5
How can I hide Top apps from Windows 10 search?