I have a custom client that connects to remote Ubuntu via websocket and runs bash there. But keys like Del, Arrows etc. don't work. How can I output what is being received on the server side? None of the solutions mentioned in show keys pressed in linux work.

UPDATE: I first asked question about SSH, but later realized that I am probably not using SSH.

UPDATE2: What have I tried. 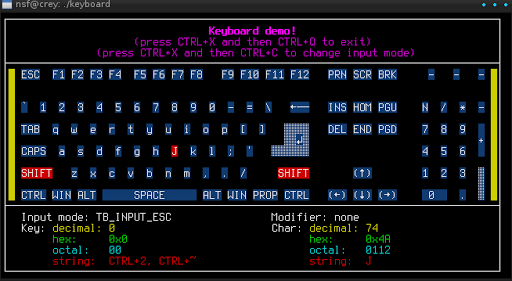 The result showing stty -a was promising, but neither the question nor the other answer pointed to the usual way to find what is sent by a special key such as Del, Left-cursor, etc.

It is unclear which "Del" OP is referring to. I have both Delete and Del keys on my keyboard (on the editing- and numeric-keypads). Both could send a series of data bytes beginning with ESC (the ASCII escape character). That is, in a regular terminal.

However, the question referred to websocket, which sounds as if this is running in a web browser. The screenshot shows some type of onscreen keyboard, with DEL in the editing keypad.

If the implementation is complete, one would expect something like this to be sent to the shell when pressing that key, if you first press controlV:

The ^[ is the echoed ASCII escape character (control[). You need the controlV lnext character to prevent the shell from interpreting it or throwing it away.

The lnext (literal next) setting is a feature of any termios which you are likely to encounter, but oddly not mentioned in the POSIX standard except as reserved for an extension (see the mention of VLNEXT). However, since this is tagged for linux, the Linux documentation is what you can use for a reference:

You can see it in the output of stty -a, i.e., in the fourth output line in this example:

I think you need to take a step back and think about what you're trying to do. You weren't clear on how you are connecting to the server over WebSockets. I'm assuming you are connecting to a WebSocket server which is proxying the connection to the telnet port, is that right (because WebSockets can only connect to WebSockets)? You may want to take a look at the Websockify project which has an example VT100-compatible telnet client. You could base your project off that.

Not the answer you're looking for? Browse other questions tagged linux bash keyboard terminal remote-access or ask your own question.

1
Some keys when pressed insert two characters
2
radmin behaving as if my shift key is pressed down
2
interpreting stty output to start connection with hyperterminal
6
Show Keys on Screen
4
Some of my keys are automatically being pressed along with other keys
1
Execute command when sequence of keys is pressed
0
Change return to control if pressed with other keys, to return if pressed alone… on Linux
1
Detect keys already pressed at the time script starts