For questions specific to Windows 8. Use [windows] instead for questions involving Windows in general.

Questions with this tag should refer specifically to versions of Windows 8. Anything related in general (non-version specific) to Windows OS should be tagged with windows.

During the //build/ conference in September 2011, Microsoft released a developer preview version of windows-8 to let developers come up to speed with the new Metro UI look and design philosophy (previously seen in Windows Phone 7 & Zune HD) and its new underlying runtime: winrt.

The main feature that was shown is the extensively redesigned user interface, optimized for touch as well as use with mice and keyboards. A new "Start screen", similar to the one in Windows Phone 7, includes live application tiles. The Start screen replaces the Start menu, is triggered by the Start button on tablets or the Windows key on keyboards, and is also the first screen shown on startup. The user can go to the regular desktop by choosing the "Desktop" tile or a traditional desktop-based application. 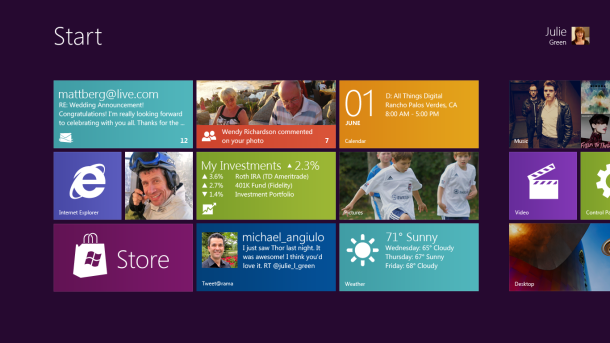 Significant client side technologies from Windows 8 have been incorporated into Windows Phone 8, helping to ease porting applications between these two distinct platforms.

Mike Angiulo confirmed at Computex 2011 that Windows 8 will use OEM Activation 3.0 instead of Windows 7 OEM Activation 2.1, which will make it less prone to cracks.