Sadly, my most voted-up answer on Stackoverflow (311 votes) belonged to a question that later got deleted. The question came from a girl that asked for something cute that she could put on the icing of a birthday cake for her programmer boyfriend.

I suggested that, if her boyfriend is somewhat mathematically inclined, she write the following:

If he doesn't get it at first, she could tease him with saying that it is obvious that he should take the polar plot of it. If he still doesn't get it, she should tell him to enter it in WolframAlpha, that should yield the result: 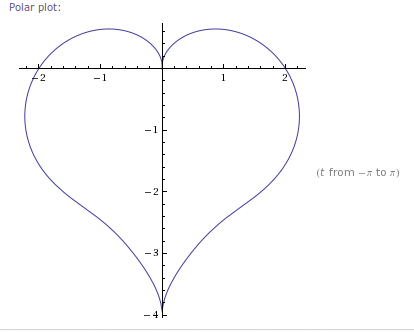